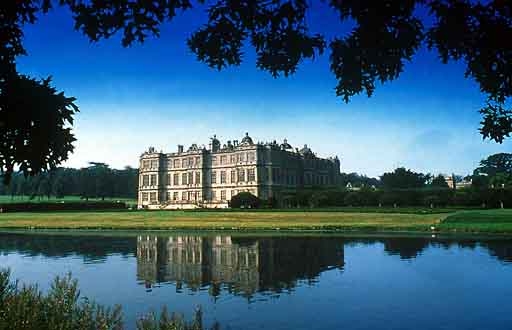 All groups must have an appointment to tour the House

The splendour of Longleat House nestling alongside a lake and within rolling 'Capability' Brown landscaped grounds is a view that cannot be missed. Fringed by thousands of trees, the grounds include formal gardens, a Secret Garden, the Pleasure Walk, a 19 century planting of rhododendrons and azaleas, topiary and fine examples of mazes including the Love Labyrinth, the Sun Maze and the Lunar Labyrinth. A more recent addition to Longleat are the standing stones at Heaven's Gate - the massive stones and a ring-shaped gateway - made up of 13 smaller stones - form part of a gigantic sculpture which was commissioned by the Seventh Marquess of Bath.

The park underwent a major 're-fashioning' by 'Capability' Brown under the instruction of the 1st Marquess during the latter half off the 18th century. This work was continued by the 2nd Marquess who employed Humphry Repton to re-design Half Mile Lake which had originally been constructed as a canal by the 1st Viscount Weymouth. It is Humphry Repton who built the island where Longleat's Lowland Gorillas, Nico and Samba, now live. One of the most recognisable features within the park has to be Heaven's Gate. Designed by 'Capability' Brown, this gap in the beech trees offers magnificent views across Somerset.