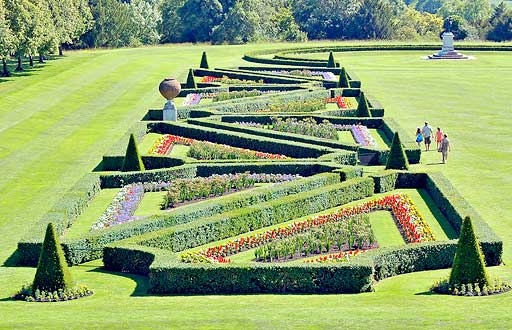 Spring and summer bedding schemes on the Parterre and Long Garden displays and autumn colours in the Water Garden.

Travel to Cliveden by 'Green transport' and receive a £1 voucher to spend in the National Trust shop or cafe.
Mooring charge on Cliveden Reach (£9.00 per 24 hours; including members) does not include entry fee to Cliveden. Tickets from River Warden. Mooring at suitable locations for more than mile downstream from Cliveden boathouse

Nearby Marlow, Henley and Windsor

Set high above the River Thames with far-reaching views, these beautiful gardens capture the grandeur of a bygone age. Stroll through a series of impressive gardens, each with their own special charm. From the iconic parterre with its ever-changing floral displays to the statuary and topiary in the Long Garden the gardens delight in every season. Formal gardens give way to open glades, majestic woodland and picturesque Thames riverbank with miles of walks to discover.

For more than 300 years Cliveden was home to dukes, earls, viscounts and for a while a prince. A glittering hub of society, Cliveden hosted exclusive parties and political gatherings, later becoming infamously associated with the Profumo Affair. The gardens have been visited by virtually every British Monarch since George I and many famous designers, including John Fleming, Nora Lindsay and most recently Sir Geoffrey Jellicoe have helped shape them. The current house, which was built by Sir Charles Barry in 1850 and subsequently bought by Lord Astor in 1893, is now a luxury hotel.