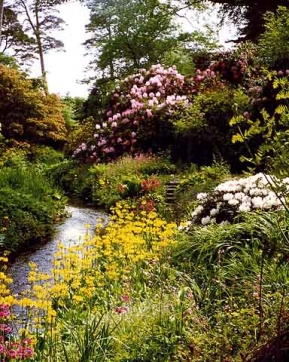 Onsite Facilities
Parking: Yes
Shop: No
Teas: No
Dogs Allowed: Yes
Lavatories: Yes
Plants for Sale: No
Refreshment: No
On Lead only: Yes
Disabled Access: No
Lunches: No
Picnics: No
Special Events: No
Other Facilities & Comments:

Although the hills are chalk, the garden is situated on a mound of green sand, which runs for a mile down the centre of the valley. This, with the humus and dappled shade provided by the large beech trees, was the perfect setting for the rhododendrons and magnolias gathered from expeditions to the Himalayas by Wilson, Forrest, Rock and Kingdon Ward. They tower over small lakes, streams and cascades which in summer are enhanced by primulas, astilbes, and water-lilies. March sees the magnolias and early rhododendrons, April and May, Japanese cherries and a profusion of rhododendrons and azaleas, together with Pieris Forestii with its brilliant red shoots. In late May and June many fine specimens of Davidia Involucrata - the pocket handkerchief tree - are a particular feature. The autumn colouring is quite sensational.

Minterne has been the home of the Churchill and Digby families for nearly 350 years. John Churchill acquired the property in the early 1600's and was succeeded by his son, Sir Winston Churchill. The Churchills were Royalists in the Civil War after which they were heavily fined by Parliament but after the restoration of Charles II their fortunes were also restored. Sir Winston left Minterne to his younger son, much to the displeasure of his eldest son, John Duke of Marlborough, who just had to 'make do' with Blenheim! In 1768 Admiral Robert Digby, a younger son of the 7th Baron Digby of Sherborne Castle, bought Minterne from the executors of the Will of General Charles Digby. In his diary later that year Robert wroteVisited my new estate, valley very bare, trees not thriving, house ill contrived and ill situated. He immediately set about improving it with an eye to Capability Brown's work at Sherborne Castle.