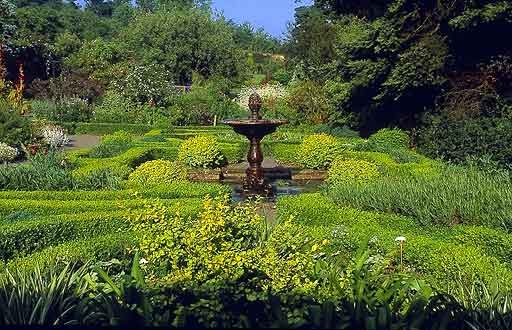 The enchanting gardens that surround the house were originally established by Sir Edward Hasell in the 1680s and the Terrace Walk, with its herbaceous borders containing many familiar and rare perennials, still survives. The Rose Walk features over 100 old-fashioned roses and many named ancient apple trees. It leads on to the Gazebo which is set into the 18th century garden wall and in summer is covered with Clematis Tangutica.

Imagine a silver fir tree over 19 feet in girth and 85 feet high! This colossal specimen of Abies Cephalonica is the largest in the UK. The Tudor Knot Garden nearby surrounds a pretty fountain and is planted with tulips, herbs, Viola Cornuta Alba and Agapanthus.

A highlight of the garden is the magnificent display in early summer of the blue Himalayan poppies amongst the wild flowers beside the Dacre Beck. Other features of the garden are the intriguing Tudor Grotto which is a little house above the river, and the secret gate into Lob's Wood, a glorious woodland walk above the Beck. Last but not least is the magnificent Tulip Tree which in recent hot summers has flowered splendidly.

New to the garden are the earth sculpture giantess and wild flower spiral.

Originally the gardens were intended merely to produce medicinal and culinary herbs for the house, but after Sir Edward Hasell bought the estate in the 1680s, he set out to create a more fashionable garden. It is recorded in his diary that in 1688 he built the terrace wall to create a wide grass walk that still bears his name. He also built the little grotto above the Dacre Beck which was used for quiet contemplation, and planted many yew walks and topiary.

During the 18th century work on landscaping the park in the fashionable manner continued and a weir was constructed where the Dacre Beck flows into the Eamont so that a large bay was visible from the house, with the river banks being walled in to give the impression of a continuous view. Further planting was carried out in the rocky escarpments above the house on the north side.