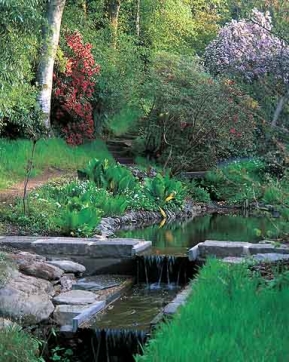 Group Appointment: No
House Open for Viewing: No
National Garden Scheme days: No
Best Times of Year to Visit:

Onsite Facilities
Parking: No
Shop: No
Teas: No
Dogs Allowed: No
Lavatories: No
Plants for Sale: No
Refreshment: No
On Lead only: No
Disabled Access: No
Lunches: No
Picnics: No
Special Events: No
Other Facilities & Comments:

All Catering by prior arrangement and Guided Tours on request. Partial access for the disabled.

Glenarn is a West Coast garden with a world famous collection of Rhododendrons, Magnolias and other ericaceous plants. Set in a steep sided glen, the garden has a Himalayan character, but also has a pond, rock garden and vegetable patch as well as bee hives. Re-construction of potting shed, cold frames and shade house now completed, and work ongoing in the rock garden, now fully deer fenced.

This sheltered woodland garden overlooks the Gareloch and is well-known for its collection of rhododendrons, many of them rare, tender and difficult to grow in less well-protected locations. Its trees, shrubs and beautiful magnolias, with a carpet of snowdrops, daffodils, crocus and primulas below make for a delightful walk in Spring. Later on in May, the Magnolia wilsonii with its upside-down flowers and lily of the valley scent and magnolia globosa are not to be missed. Other magnolias, such as rostrata, flower in June.

The rock garden provides colour and interest from spring to autumn.

The house and garden at Glenarn were built in the late 1840's and soon after the garden received plants from Joseph Hooker's 1849-50 expedition to Sikkim, notably the Rhododendron falconeri at the side of the house. The Victorian structure of the garden was developed by the Gibson family into a woodland garden over the following 50 years after they acquired the property in 1927. The plant hunting expeditions of Kingdom Ward and Ludlow & Sherriff provided a great many plants as did other major gardens in Scotland. The Thornley family arrived at Glenarn in 1983 to find much to be done to restore the gardens to their former glory and then to extend their scope still further, work which is continuing.