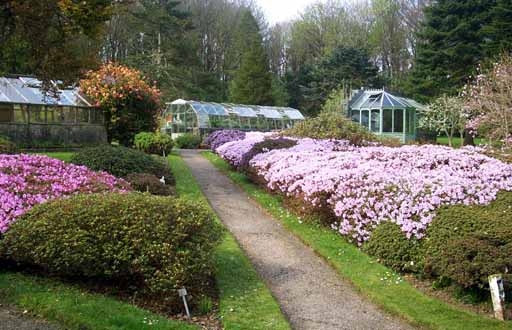 Please check with garden owners or their website to confirm current dates open Every day; dawn to dusk.

Teas, coffee and meals available in hotel or boathouse. Partial access for disabled. For events see own website. Accommodation available - Hotel, B and B, camping

Semi formal plantings in the wall garden with many interesting and unusual herbaceous and woody plants. There is a superb Rhododendron collection within the woodland area containing many plants from the Horlick Collection, so named after Sir James Horlick (died 1972) who bred many new Rhododendrons during his lifetime. The Rhododendrons are interspersed with camellias and other exotic plants especially from the southern hemisphere. From the viewpoint there are stunning views out towards the craggy west coast of Gigha and the isles of Jura and Islay.

In Hotel other B&Bs on the Island, see website for details

Isle of Gigha is a very picturesque Southern Hebridean Island.

On the Community-owned Isle of Gigha, there are 54 acres of Achamore Gardens. The warming influence of the North Atlantic Drift allows an even greater array of sub-tropical and temperate plants to grow happily outdoors. The present compartment woodland layout was created by Colonel Horlick and his assistant Kitty Lloyd Jones in 1946. These woodland compartment, linked with meandering signposted paths, allow the vast number of rhododendrons to grow and flourish.

The Clan McNeill became the undisputed Lairds in 1590 after a fierce power struggle between the MacDonalds and the McNeills. At the end of the 19th century Captain William Scarlett, the 3rd Lord Abinger, purchased the estate and built the listed 'B', Achamore House in 1884 to the design of John Honeyman. The main areas of woodland to the north and south of the house were planted by William Scarlett to provide shelter from the strong winds and salt spray and game cover. When Sir James Horlick acquired the estate in 1944 he wished to establish a garden to grow his more tender Rhododendrons. He managed this by cutting small clearings in the Ponticum and trees and by 1970 the garden was full and looked magnificent. On his death he left some of his collection to the National Trust for Scotland so that rare species could be propagated and shared with other great gardens.

On the 15th March 2002 the Island was purchased in a Historic buy-out by the inhabitants of Gigha. It is now owned and managed by the Isle of Gigha Heritage Trust.